In Riverview Cemetery, Clarksville, Tennessee (formerly known as the City Cemetery), there rests a tombstone atop a hill that is perhaps unique in the cemetery for what it does not say: 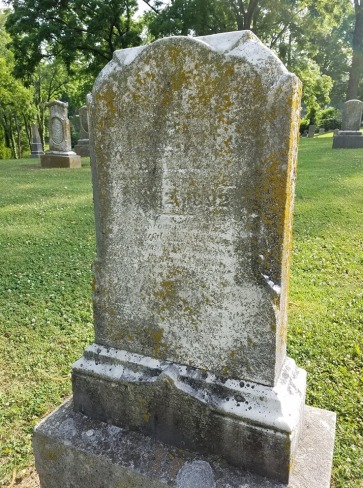 Dearest Lord, one we have laid in the peaceful grave’s embrace, but her memory will be cherished till we see Thy heavenly face.”

What’s missing is Belle’s surname.  And her birth information.  And her age.  And any mention of her family.

Stories have long wandered across the lips of Clarksville historians about the identity of “Belle.”  All of the rumors seem to have a common element:  that Belle was somehow associated with a ‘house of ill fame,’ either being the daughter of a prostitute, or the prostitute herself.  There’s also a common element that, at her funeral, the cemetery was full of hacks and carriages of Clarksville’s business men, but with the curtains drawn to conceal the identities of the occupants!

In her 2002 publication Riverview Cemetery:  Looking Back to Those Who’ve Gone Before, Clarksville genealogist and historian Irene Morrison Griffey shared variations on Belle’s story:

Longtime Montgomery County Historian Ursula Smith Beach was said to have known Belle’s identity, and that of Belle’s father, but took the information, discreetly, to her own grave.

After attending a wonderful tour of Riverview Cemetery led by Carolyn Stier Ferrell, and hearing of the mystery surrounding “Belle,” I decided to take my turn at trying to learn her identity.

My search led me to this wonderful record on FamilySearch – a “Mortuary Record” for Jefferson County, Kentucky, for November 1892 – the month in which “Belle” died:

So here is the death record of a 28-year-old widow(?) named Belle Terry who died in Louisville (Jefferson County) on November 12, 1892 – the same day as “Belle” – who was a resident of Clarksville and was buried in Clarksville the next day.  Oh, and Belle Terry died of a ‘disease of the brain,’ which instantly brings syphilis to mind, doesn’t it?  The attending doctor was W. Roberts, presumably physician Walter T. Roberts whose office was at 2113 W. Market, Louisville.

Belle Terry’s nativity of “City” should be interpreted as Louisville, Kentucky, since this is a Jefferson County death record.  For it to have been known that Belle was a native of Louisville, there must have been an informant who knew her and provided much of the information, but the names of informants were not transcribed into the Mortuary Record.

You can view the complete page via this Ancestry link (if you have an Ancestry membership), or a much clearer FamilySearch image, for free, if you have a free FamilySearch login.  The original page is from Jefferson County Death Records, Volume 8, page 146.

Belle Terry, a resident of Clarksville, was born about 1864 in Louisville, and died there November 12, 1892 of a disease of the brain.  She was buried the next day in Clarksville.

Armed with a surname, what else can be found about Belle?  Well, I was quickly able to find this October 6, 1888 clipping from the Clarksville Evening Chronicle, thanks to the free-and-awesome Chronicling America newspaper website.  A fundraising drive was underway in Clarksville to combat yellow fever.  Belle Terry, who would have been about 24 at the time, made a significant contribution of $5.00.

I have spent a few additional hours looking for more records of Belle Terry, but so far have found nothing.  Census records have not yet revealed a Belle, born circa 1864 in Louisville, that might be her.  Louisville city directories for the years preceding Belle’s death survive, but she’s not in them.  Then again, her death record stated that her residence was Clarksville, not Louisville.

Perhaps her death in Louisville was due to her seeking treatment for her disease, or perhaps she was convalescing with family at the time of her death.  There are Clarksville city directories surviving for 1885-86 and 1891, but she’s not in them.  Probate and land records for her do not exist in Montgomery County, nor for any Mr. Terry.

Questions abound, which is part of the enduring draw of Belle’s story.  Now that we seem to have more information about “Belle,” please join me in searching for more of her story.

Here are some of the places you can read more about what we’ve previously known about “Belle”: