While transcribing County Court Minutes in one of my ancestral counties, I came across a legal term that I had not seen before – “casa” – in the following entry.  Look for the word near the beginning of the 4th line from the top and the middle of the 3rd line from the bottom: 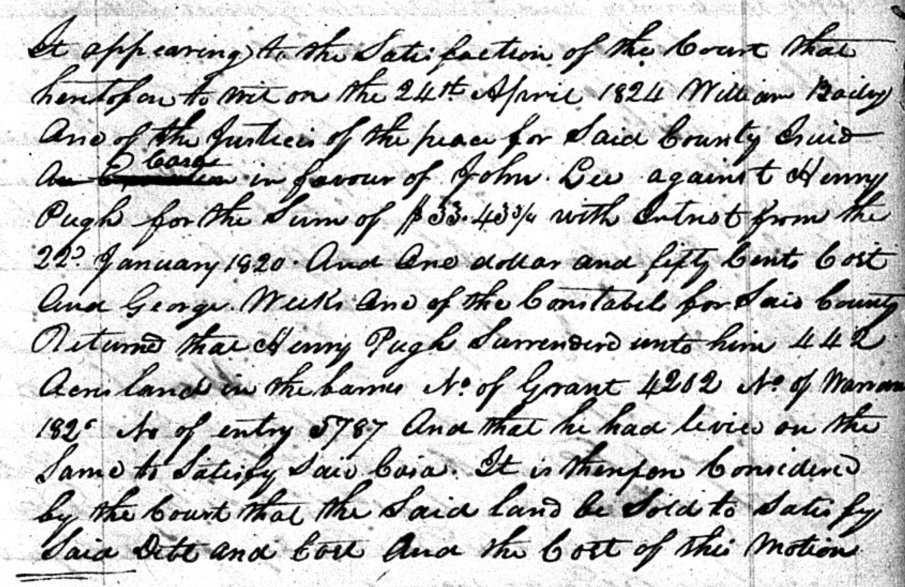 I have been reading 19th-century handwriting for many years, but I started second-guessing myself because what looked like “casa” to me couldn’t possibly be that.  From the context, I was sure that it was a legal term, so I turned to my trusty friend, Bouvier’s Law Dictionary (1856 edition).  I opened the page that contained the legal terms beginning with “C”, then used CTRL+F in my browser to search the entire page for the word “casa”.  Nothing.  Naught.  Nil.

I then turned to other trusty friends – my genealogy friends on Facebook, providing the above sample and soliciting their wisdom.  Collectively, we quickly agreed that there were no Court Appointed Special Advocates in 1824 Tennessee.

It didn’t take long for one of those smarter-than-average friends to post the following definition:

CAPIAS AD SATISFACIENDUM, practice. A writ of execution issued upon a judgment in a personal action, for the recovery of money, directed to the sheriff or coroner, commanding him to take the defendant, and him safely keep, so that he may have his body in court on the return day, to satisfy, ad satisfaciendum, the plaintiff. This writ is tested on a general teste day, and returnable on a regular return day.

2. It lies after judgment in most instances in which the defendant was subject to a capias ad respondendum before, and plaintiffs are subject to it, when judgment has been given against them for costs. Members of congress and of the legislature, (eundo, morando, et redezzndo,) going to, remaining at, and returning from the places of sitting of congress, or of the legislature, are not liable to this process, on account of their public capacity; nor are ambassadors, (q. v.) and other public ministers, and their ,servants. Act of Congress of April 30, 1790, s. 25 and 26, Story’s Laws United States, 88; 1 Dunl. Pr. 95, 96; Com. Dig. Ambassador, B; 4 Dall. 321. In Pennsylvania, women are not subject to this writ except in actions founded upon tort, or claims arising otherwise than ex contractu. 7 Reed’s Laws of Pa. 150. In several of the United States, the use of this writ, as well as of the capias ad respondendum, has been prohibited in all actions instituted for the recovery of money due upon any contract, express or implied, or upon any judgment or decree, founded on any contract, or for the recovery of damages for the breach of any contract, with a few exceptions. See Arrest.

I was relieved not only to have the question answered (it was late in the evening and I was at genuine risk of losing sleep over this), but also relieved to have my handwriting skills vindicated.  I had indeed seen “casa” on the page.

I went back to my trusty friend Mr. Bouvier to see why I had missed this entry.  Here is part of the Bouvier entry for capias ad satisfaciendum:

This writ is, in common language, called a ca. sa.

My CTRL+F search for “casa” had failed me, and I have learned to think more out-of-the-box when using search functions in my research.